The Club’s Seaside Fiesta and Spooktacular surf contests always include Tadpole division events.  The article shown below was posted for our 2011 Kona Pro contest but still provides a good overview of the Tadpole Division contests. Tadpoles will receive a free contest t-shirt, plus custom trophies to winners, and the entry fee is $10 for kids 11 and under with push-in by parents only.

In the context of surfing, our youngest surfers have been given the nickname of Tadpoles. While lacking the external gills, they are also in the process of their metamorphosis into adult surfers. Unlike in nature, they are watched closely in the water by their parents, who push them into the waves at a tender age before they have learned to catch them on their own. 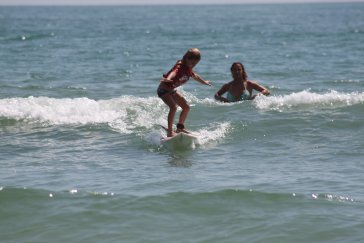 At the surf contests produced by the Smyrna Surfari Club, the Tadpole event has become one of the most anticipated divisions. All the competitors are ten years of age or under, and must be accompanied in the water by a parent or adult, who push them into the waves. The rides that the kids get, and the happiness on their faces, never fails to bring cheers and applause to the spectators and parents alike. “The Tadpole Division is the part of our contest that the Surfari members look forward to the most,” said Jeff Crawford, Club Co-Chairman. “The enthusiasm that these youngsters show is priceless.”

The Tadpole surfing will be one of the featured events at the Kona Pro Surf Contest, which will take place on Saturday, April 2, at the Inlet in New Smyrna Beach. The Kona Pro is a four-day event, which begins on Thursday, March 31, and will showcase the finest Pro surfers on the East Coast, as part of the prestigious Western Atlantic Surf Series. The WASS is the only Pro surfing tour on the East Coast and crowns an annual champion in both Men’s and Women’s divisions. “WASS is thrilled to begin our 2011 season with the Kona Pro in New Smyrna Beach,” said Executive Director Mike Bloom. 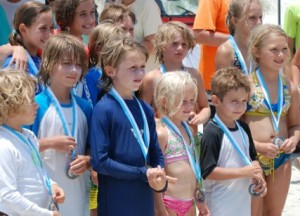 “We are also excited to have the Smyrna Surfari Club as a partner for this inaugural event. The Surfari Club has been an integral part of pro surfing in New Smyrna for decades, going all the way back to the legendary Aloe-Up Cup, in 1988.”

While the action in the Men’s division could begin as early as Thursday, the 31st, if conditions permit, the Tadpole contest will be run in it’s entirety on Saturday, the 2nd, for the convenience of the youngsters and their families. “The Tadpole is designed to be a fun-only, family-oriented event,” said Surfari Co-Chairman Alicya Simmons. “We will have entry registration on-site at the beach, a little bit south of the main Kona Pro competition zone. Entry fee for the Tadpoles is $20, and each competitor will receive a commemorative event T-shirt. Families that would like to confirm their entry in advance can download an entry form from our website: < www.smyrnasurfariclub.com >”

“Our goal is to produce the most family-friendly event we can,” continued Surfari Head Judge Tom Wright (and original Surfari Club Member). “We will get the competition started as soon as possible, and have the kids surf one time, before they start shivering.” In addition to a prize medallion that every competitor will receive, the surfers with the top scores from all the heats will receive one of the coveted, hand-made trophies that the Surfari events are known for. 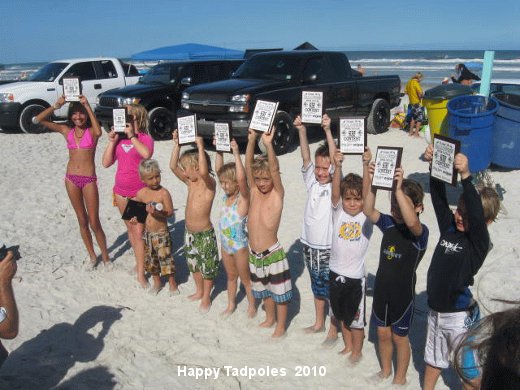 The Tadpole event has been made possible this year by the generous sponsorship of Attorney Richard Troutman, P.A., of Winter Park, Florida. “I am a surfer myself,” said Mr. Troutman, “and nothing gives me more satisfaction than seeing the youngest surfers enjoying the sport in a safe and wholesome format. My firm is very pleased to be a partner with the Surfari Club to make this event possible.”

2010 was another successful year for the Smyrna Surfari Club, which now makes 31 years and counting. The Club was able to award $6,000 worth of scholarships to three deserving senior high school students. The club also helped support other community events such as the “Before the Fall” contest at Bethune Beach and provided funds for mission work in Nicaragua. Surfari fund-raisers included two annual contests, the Seaside Fiesta and Halloween Spooktacular. The Club also held four beach clean ups in 2010, and added a new clean-up area this year, covering an entire mile directly south of the Inlet jetty, where the Kona Pro will be held.